I’ve been in Yorkshire for a week.

Things I love about Yorkshire:

Hills
Every short walk includes vertiginous pathways
Your average semi is nestled in a valley completely surrounded by mountainous hills
Everywhere you look there’s a big hill right behind you
The word ‘Flat’ is not in the Yorkshire vocabulary, unless you’re talking about northern headwear.
To be clear – Yorkshire is a bit hilly

These things I’m familiar with, but this trip up North revealed something new.

A few months ago the husband looked up ‘waterfalls UK’ on Google in anticipation of this trip home (my home) and came up with Ingleton Falls, in the Yorkshire Dales.  Scanning through images of fairy tale waterfalls; pretty, stone laden paths and a green and pleasant land, he decided this was just the thing for our Easter break up North.

And on Wednesday 30th March, which was forecast bright and sunny (with the odd shower here and there) we set off to Ingleton; via Keighley, Skipton, and Clapham (there’s a Clapham in the Dales.)  We arrived roughly an hour and a half later, due to clusters of road works and narrow country lanes, where the locals’ favourite hobby appeared to be a game called Terrorise the Tourist, in which they tried to ram us poor sods off the road – with bonus points earned for road rage and unsavoury hand gestures.

But let’s forget the entitled and aggressive behaviour of your average UK driver and focus on the beauty of the Dales.

We arrived in Ingleton to inky black clouds hanging sullenly overhead, with a glimmer of sunlight breaking through.  We followed the signposts to the waterfalls trail and parked up near the Tourist Information office, which is when it began to pour.   As we sat in the car it began to dawn on me (the husband tends to be oblivious to most everything – always erring on the optimistic side) that we were not in fact prepared, or properly attired, for a walk in the Yorkshire countryside.

I had at least bought a raincoat along and was wearing my trainers (I’m never not wearing my trainers.)  The husband had on a pair of black leather work shoes (office work, not labour intensive); a pair of jeans, a shirt and a waist length jacket.  To the sound of rain lashing against the car windows, the husband said: ‘Come on let’s get going.’   Exiting the car, the husband decided that maybe a hat was in order and scrabbled around in the boot, in the hopes that some sort of sturdy rain hat would magically appear.  Miraculously there was a hat in the boot – a Santa hat left over from the husband’s works’ Christmas ‘do’.  Such was the torrential nature of the rain that the husband plonked the Santa hat on his head and seriously considered wearing it.  After I made it clear that I didn’t want to be associated with the Santa hat, he chucked it back in the boot and we set off.

Had we researched Ingleton Falls, we would have known that there is in fact a car park right at the start of the waterfalls trail.  Instead we parked at the top of a hill a good few hundred yards away.  Blissfully unaware, we saw this extra bit of a walk as no big deal and a spot of added healthy exercise, considering the reward was going to be a, roughly, 4 mile leisurely stroll past lots of pretty little waterfalls –  how hard could it be?

Being the geographical dimwit that I am, it never occurred to me that waterfalls require somewhere to fall from; a somewhere that is usually placed at a great height.

Do you remember the bit in The Lord of the Rings, when Frodo and Sam set out for a bit of a hike through the local woods, mountains and valleys?  Accompanied by a lilting orchestral score, Frodo casually mentions that: ‘It’s a dangerous business, going out your door’, and pretty soon they’re mixing with ghost riders and orcs; vertical cliff edges, torrential rivers and Gandalf whinging on about EVIL Morrr-dorrr.

Let’s qualify that.  That’s what Ingleton Falls is like to the uninitiated.  To the weak and flabby.  To those for whom ‘walking boot’, ‘cagoule’, ‘waterproof trousers’ are foreign words (which cagoule is actually.)  To those who think shorts and thigh length skirts are the way to go when hiking.  To those who ask: ‘how far is it to the waterfalls?’  in tones of dejected misery, as the rain seeps down their woefully inadequate lightweight coats, and drips off the end of their designer glasses – and you, or rather the husband, replies: ‘you’ve got 2 miles yet’,  in the triumphant tones of someone who’s made it to watery hell and back; as you wend your way back down to the exit.

But to the back packing crowd; to those effectively suited and booted, Ingleton Falls is a hikers paradise.  It’s like a mini Norwegian fjord; like a series of miniature Niagara falls; like taking a walk through a Middle-Earth wonderland – minus the glowing red, evil eye.

And I’d never even heard of it.

We set off admiring the scenery and listening to the sweet chirruping of the birds.  ‘Isn’t this lovely,’  I kept saying.  ‘Isn’t this what life is all about?’   The husband agreed that natural beauty was indeed preferable to a day in the office.

The path was at first tarmacked until it narrowed down to a dirt, stone laden track.  Due to the rain the track was a mud laden bog.  The husband’s smart leather shoes gave up immediately, as did my ancient trainers.  Stepping gingerly here and there, to avoid gigantic puddles and broken ankles, the sound of running water started filtering through the trees.  ‘Ooh this must be a waterfall’, thought I, grateful that maybe the unexpected trek through a bog ridden landscape might be over, and that the trail might begin to once again take on the attributes of a man-made one.    But no, the watery sound was a river gushing its way down hill, edged by black stone cliffs covered in ferns and moss.

Then we came to the steps.  Ahead was a vertical set of concrete steps, complete with handrail.  The steps were the first hint that all was not well.  Gripping the handrail, this 55 year old ascended and thought:  ‘OK, that wasn’t too bad, this seems doable, just so long as vertical stone steps aren’t too much of a feature.’

Countless stone steps later – and steps of every other nature (wooden steps, holes cut into the hillside masquerading as steps, slabs of stone pretending to be steps) we reached what we thought was the top of the Ingleton Falls trail, having seen two wonderfully full and impressively loud waterfalls. 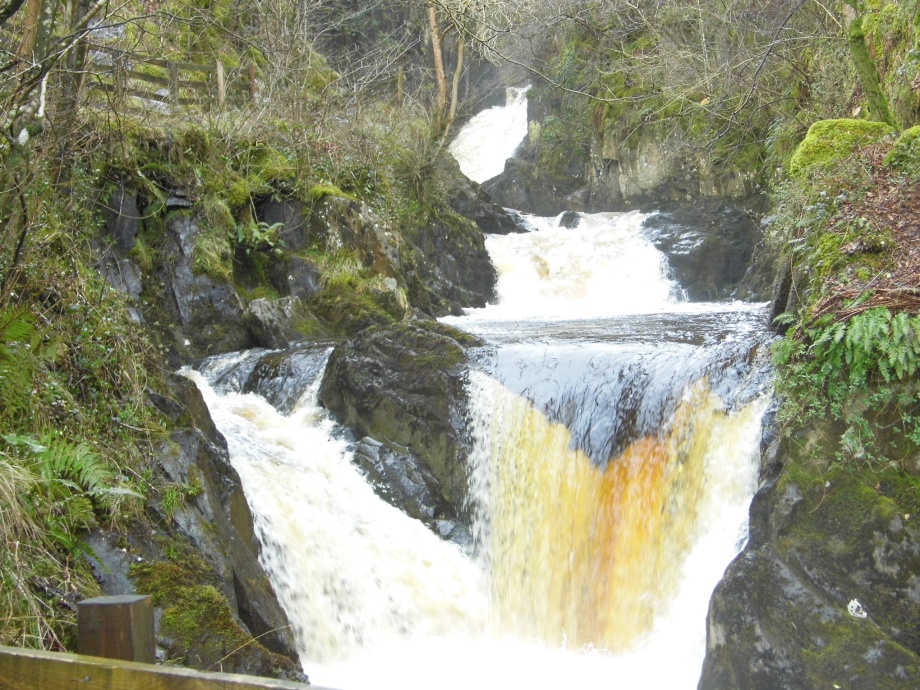 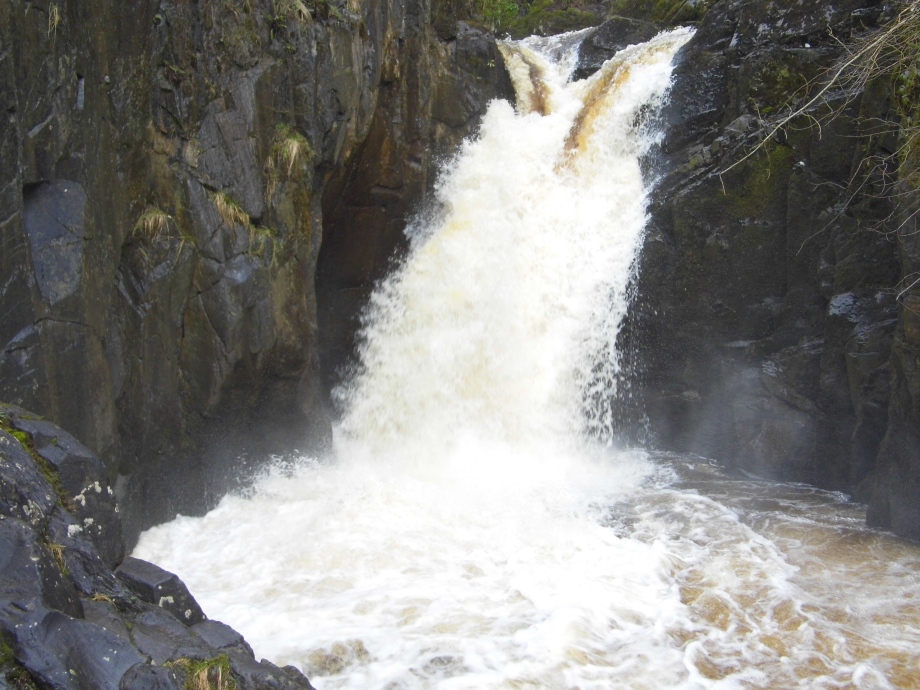 A break in the rain occurred and sunlight flooded the place.   Just as I was beginning to worry that dehydration had set in (we hadn’t even brought along a drink) a tiny shed appeared, selling drinks and sarnies;  shafts of sunlight illuminating it as though it had been sent down from heaven.  A notice on the hut stated that there was only 2 minutes to go and we would reach the BIG ONE (the very top waterfall.)

Slurping back spring water and lemon we climbed more impossibly vertical, and dangerously wet steps, to find ourselves at the summit, where the rain decided it hadn’t been quite wet enough previously and reappeared, beating us all into submission. 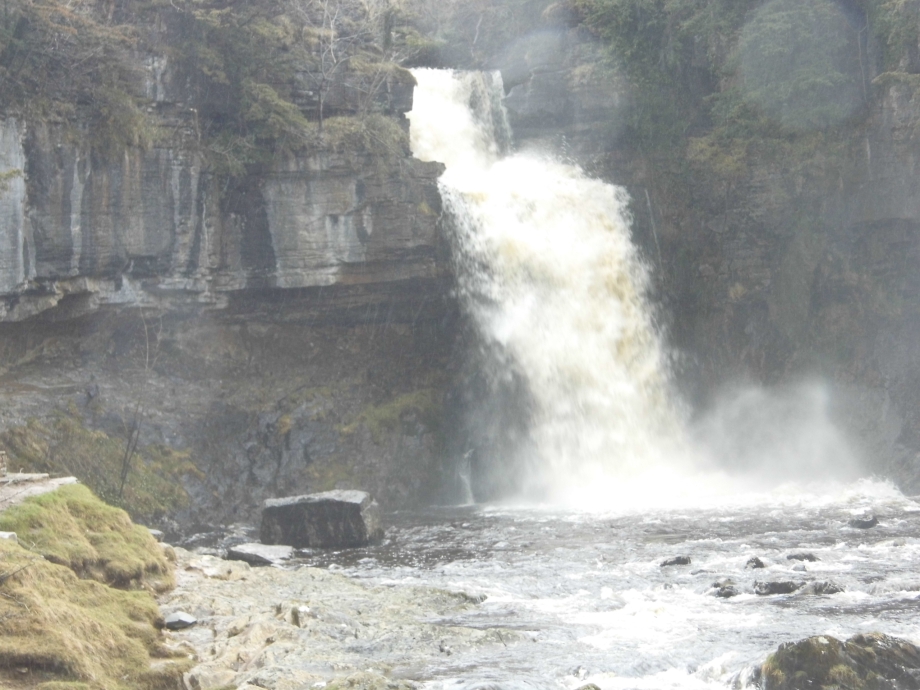 The trail is a circular route.  You go past the BIG ONE, out onto open farmland and back down via a proper lane.  But I could see that up on the farmland the people were caught up in a hurricane and sleeting rain, entirely open to the elements.  They were a beaten, battered and sorry looking crowd, so I decided to go back the way we’d come, practically running away, in an effort to get back to the relative safety provided by the cliffs and the trees.

Back at the entrance there was a cafe, but we were too sodden and mud splattered to think about going inside and instead went back to the car and drove home, shoes uncomfortably full of mud and water.

I have been unable to walk properly for 2 days, as my legs have gone into a state of shock and refuse to move without sending pain signals to the old brain.

The husband loved every second of it and the plan is to go back and do the whole thing properly, with all the right kit and caboodle.

If you decide to ‘do’ Ingleton Falls then I suggest either going into intensive training for a couple of months beforehand (going up and down your hall stairs about a hundred times a day would be a good start), or going in the summer when it’s less likely to resemble a mud bath and you can pause to sit down a while in between all those tortuous steps.  However, the falls are likely to be a mere trickle then and not the majestic sight that greets your average unprepared and knackered visitor, during a rainy day in March, 2016.

One thought on “How not to climb Ingleton Falls”