A pictorial post from Son No.2, with instructions that his mother fill in the article a bit, being that ‘it’s quite small.’   Son No.2 is a very busy person so I was happy to oblige.  The featured image is Regent’s Park in the summer, being that the photos in the following post were taken during a typical dreary and overcast January, not quite doing the place justice.

Before September 2015, if you were to ask me to document my daily commute to work, via mobile phone pics, you would have received a lot of blurry photos of cramped, grey bodies filling up tube trains and a bustling metropolis.  Fortunately, I’ve now managed to climb the rented property ladder and found myself in a reasonably good sized flat (for London) positioned just shy of an hour’s very nice walk away from my work.  So, without further ado let’s begin…

I consider my walk to work to be split into two halves.  The first half consists of fairly typical London roads, looking a lot like the photo below.  Picture several roads just like this one, only maybe some have fewer trees, or perhaps the houses are smaller, or bigger, but they are all main suburban roads making up the beginning of my daily trek into the heart of London.

After passing through about five of these long and winding roads, I end up at St John’s Wood underground station. 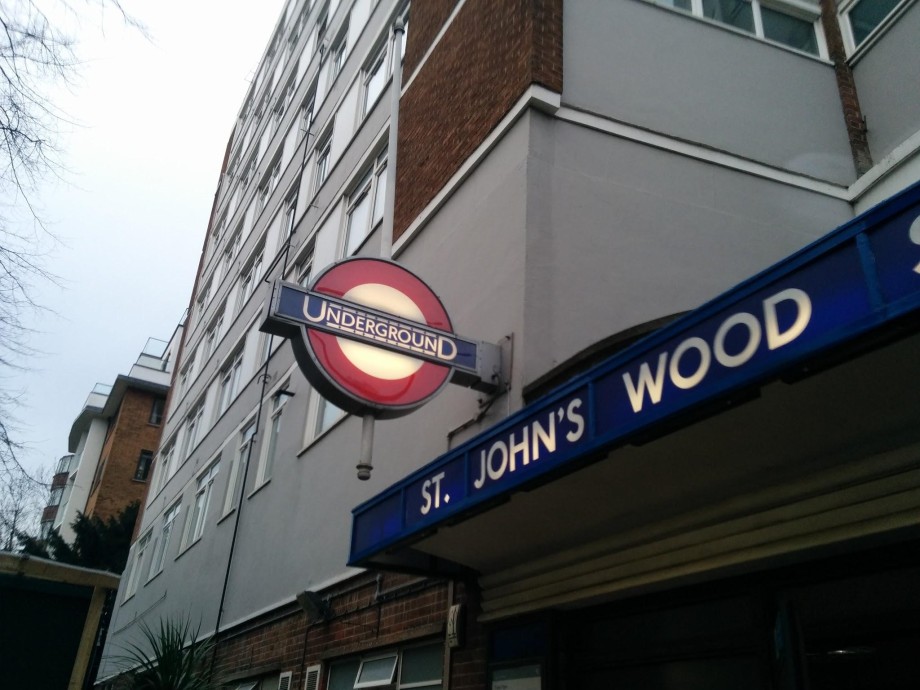 Passing St John’s Wood I reach the second half of the walk, the bit I always look forward to. This path is at the northern edge of Regent’s Park and begins a long stretch through the park, to where I work.

(Let’s hit the pause button || ….. To the left you can see an impressive white building.  This is possibly one of 8 grand villas designed by the architect John Nash in 1812.  Regent’s Park is over 400 years old and during the early 19th century Nash was asked to turn it into a sort of exclusive housing estate for ‘the wealthy and the good’.  The plan was to build 50 grand villas throughout the park finishing up with a summer palace for the Prince Regent, but the money ran out and only 8 villas were put up.  By 1836 it was decided that the not so wealthy and the not so good might also like walking about a bit in rich, posh surroundings and the general riff raff were let into the park for two days a week.   During the 1860’s, in one of the coldest winters on record, all the lakes in the park froze over and the riff raff got their skates on, completely filling up the place, with the result that 40 people died when the ice on one of the lakes cracked…… Play >)

At the beginning of the park I cross over a river.  I’m not entirely sure which river this is.

(Pause || …..  This river is actually part of the Regent’s Canal; forming part of a network of canals, built during the 18th and 19th centuries, to link the north of London with the east of London…… and Play >)

This river (canal) begins at a place near Paddington called “Little Venice”.   I sometimes see river boats going along the canal giving tourists a nice, scenic ride from Paddington to London Zoo.

(Pause || ….  London Zoo is located at the northern edge of Regent’s Park.  It houses 755 species of animals.  It opened in 1828 and is the world’s oldest scientific zoo, originally intended for scientific study but opened to the public in 1847.  Very interesting story here.  In 1914 Harry Colebourn, a Brit who had emigrated to Canada when he was 18 and trained to be a Vet, rescued a baby black bear, whose mother had been shot, naming her Winnipeg (Winnie for short) after the Canadian city.  On returning to England, after enlisting in the first world war, he and Winnie, the regimental mascot, lived with his regiment on Salisbury Plain for 4 months before they were despatched to the front line in France.  Colebourn, who loved animals, couldn’t bear (no pun intended) the thought of taking Winnie to the front line and so he drove Winnie to London Zoo asking that they take care of her until his return.  The war lasted an unexpected 4 years and by the time Colebourn returned he knew it would be wrong to take Winnie away from the zoo that had become her home, so he left her there to continue as one of the zoo’s main attractions.  Had he decided to take her back then children’s literature would have lost one of its greatest creations.

During the 1920’s a writer called A A Milne began to take his 6 year old son, Christopher Robin, along to London Zoo and it soon became clear that his son loved Winnie the friendly black bear.  Christopher Robin was allowed into her enclosure and was photographed feeding Winnie spoonfuls of honey.  Christopher Robin was so fond of the black bear that he renamed his own toy bear Winnie (previously Edward) adding ‘Pooh’ after a pet swan he owned.  From the mid 1920’s A A Milne began to compose stories based on Winnie the lovable bear at London Zoo  and the rest is children’s books publishing history……Play > )

I carry on through the park, the BT tower remaining in view for most of my walk. 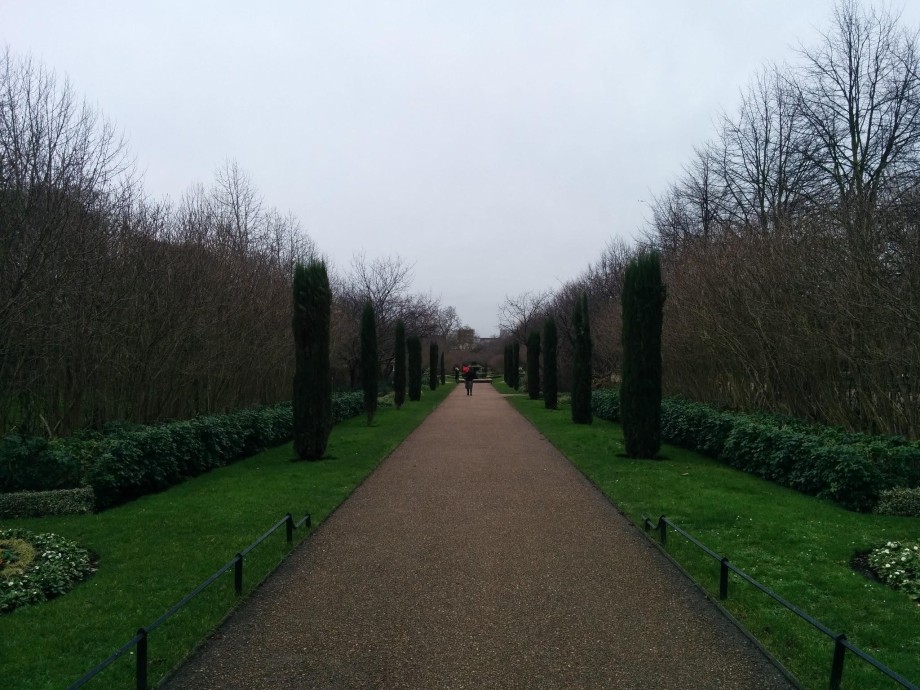 (Pause ||…. The BT tower is as old as I am.  Its cylindrical shape was chosen so that it would not move more than 10 inches in wind speeds of up to 95 miles an hour.  Its foundations are sunk down through 53 metres of London clay, consisting of a meter thick concrete raft, reinforced with 6 layers of cables with a reinforced concrete pyramid on top of that.  The tower was also built to withstand a nuclear blast from a mile away……play > )

Then I pass through some really nice bits of the park, walking past loads of brilliant fountains as I come to the end of my journey through Regent’s park. 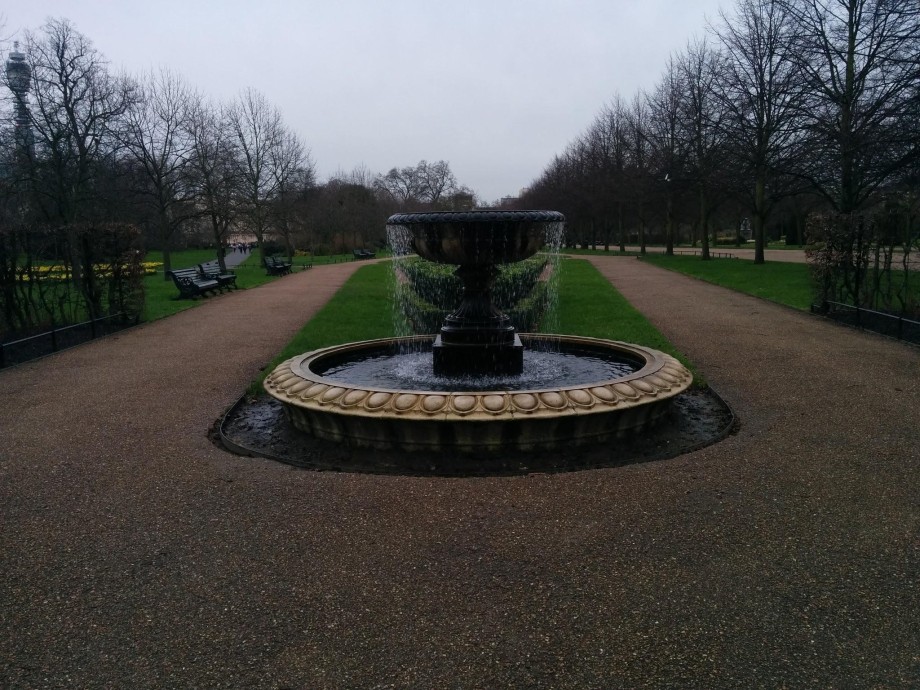