My newly acquired Sylvanian family (see blog post) have been suffering from quite a bit of serious neglect recently, due to the fact that there’s only so much you can do with a house (log cabin) that only has one room and for which you bought entirely the wrong kind of furniture.   If there was such a thing as a Sylvanian Child Welfare Officer, then they’d probably be right on my cute, plastic, furry critters’ parenting case.

Because this has been the state of the log cabin for about a week. 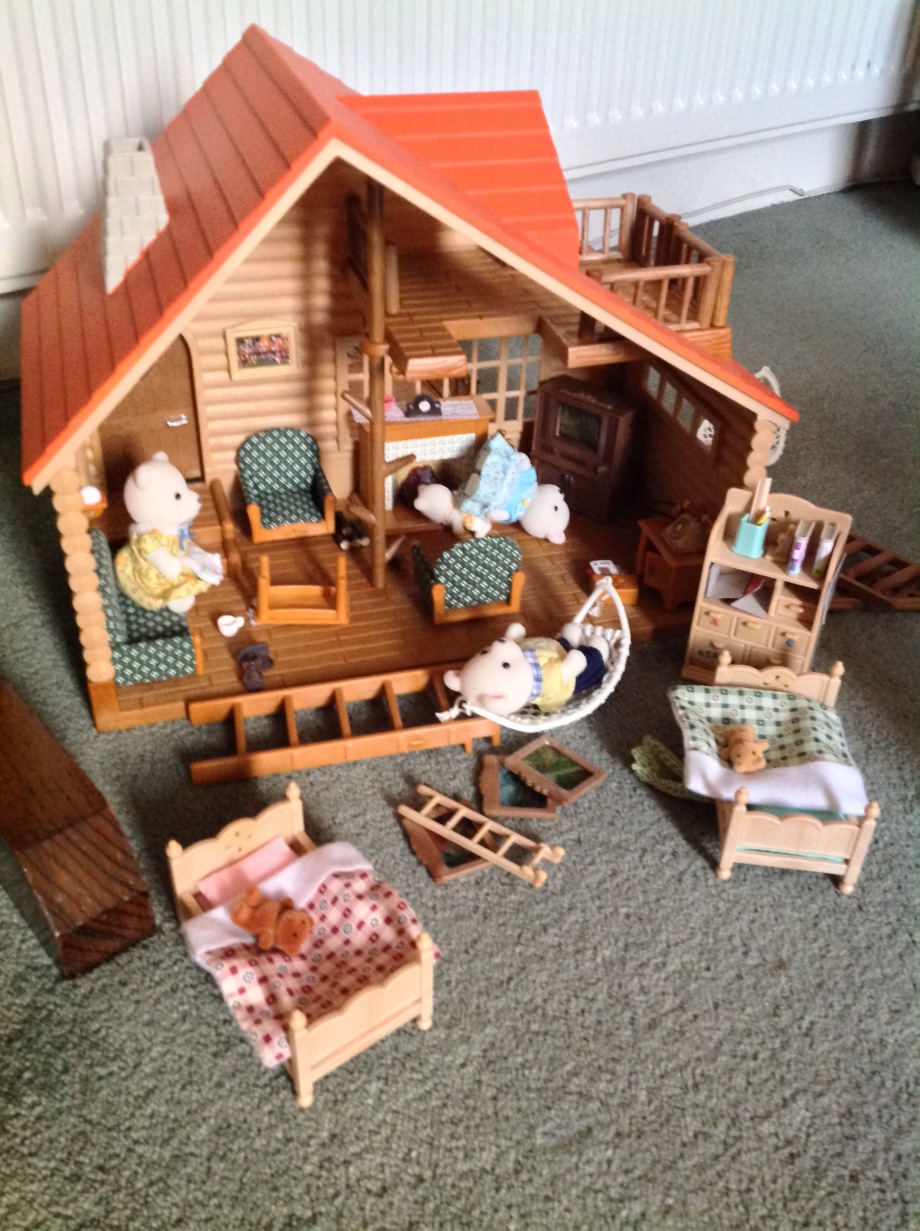 Poor baby polar bear’s head is in the fire, whilst her sister is lying comatose (is there any other way for inanimate plastic figures to be?) on top of her probably asphyxiated sibling, in front of the overly large TV (none of this flat screen stuff here, your average Sylvanian telly is a gigantic, fake wood monstrosity.)  Father polar bear is lying in a hammock, outside, in their currently non-existent garden, looking like he might have had a night out on the tiles.  The only family member left with any dignity is Mother, perched on the settee in front of a coffee table that’s playing dead.

This messy state of affairs is because I decided that if I was going to do the Sylvanian thing properly I had to splash out on another house, one that looked like a proper house, having several floors, and so I pushed the log cabin to one side, along with its occupants, whilst I concentrated on doing up my latest Sylvanian residence – the Cedar Terrace town house. 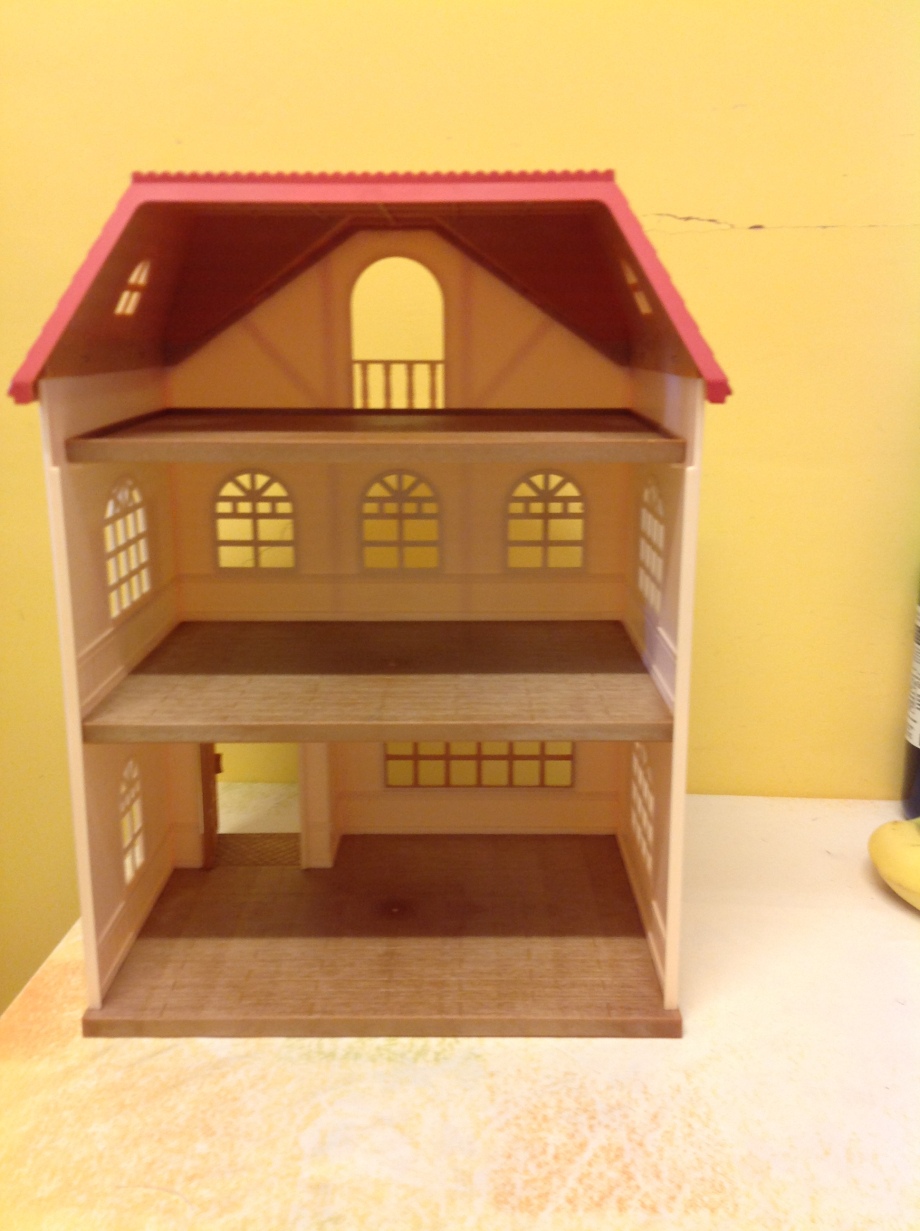 Yes, it became clear, in MY particular case of (my) newly discovered psychological disorder known as “middle-aged feathering nest syndrome with particular reference to miniature plastic toys” (thinking of submitting it to the BMJ) that things were getting pretty out of hand, even more so when, upon checking out my titchy critters’ new abode, I felt a huge sense of disappointment at its cold, impersonal and entirely plastic ‘feel.’  There must be something I can do about this, something to make things more homely and ‘real’ for my little family I kept thinking – thoughts which all proved that I was investing way too much time and emotional energy in a bunch of moulded plastic toys churned out on conveyor belts in China.

However, the husband had been forced to part with £39.99 for the new home, so I’d better do something with it.  After researching all things miniature on the web, I was astonished to find that there’s an invisible army of people out there who, like Disney, go around singing ‘it’s a small world after all’, creating miniature houses, model railways and entire towns and these people need titchy supplies for their titchy worlds.  There are plenty of companies out there churning out microscopic replicas of just about everything and anything; which is when it hit me.  My Sylvanian homes may be made out of plastic but why not bung wallpaper and carpet in there, just as though it were a real home.

Thinking what a remarkable brainwave I’d had, I then discovered various Sylvanian blogs all displaying impressively decorated houses, meaning that several toy based lunatics had got there before me.  And so, buoyed up by the fact that I’m not the only Sylvanian nutjob out there, I set about hunting down miniature wallpapers, carpets, tiles and lino’s (really, though, who knew?) and spent a couple of hours browsing a likely website before lashing out £21.93 on interior decor – just think, I could have bought a couple of cinema tickets with that, or a new top, or enough food to last two days.

My carpets and tiles 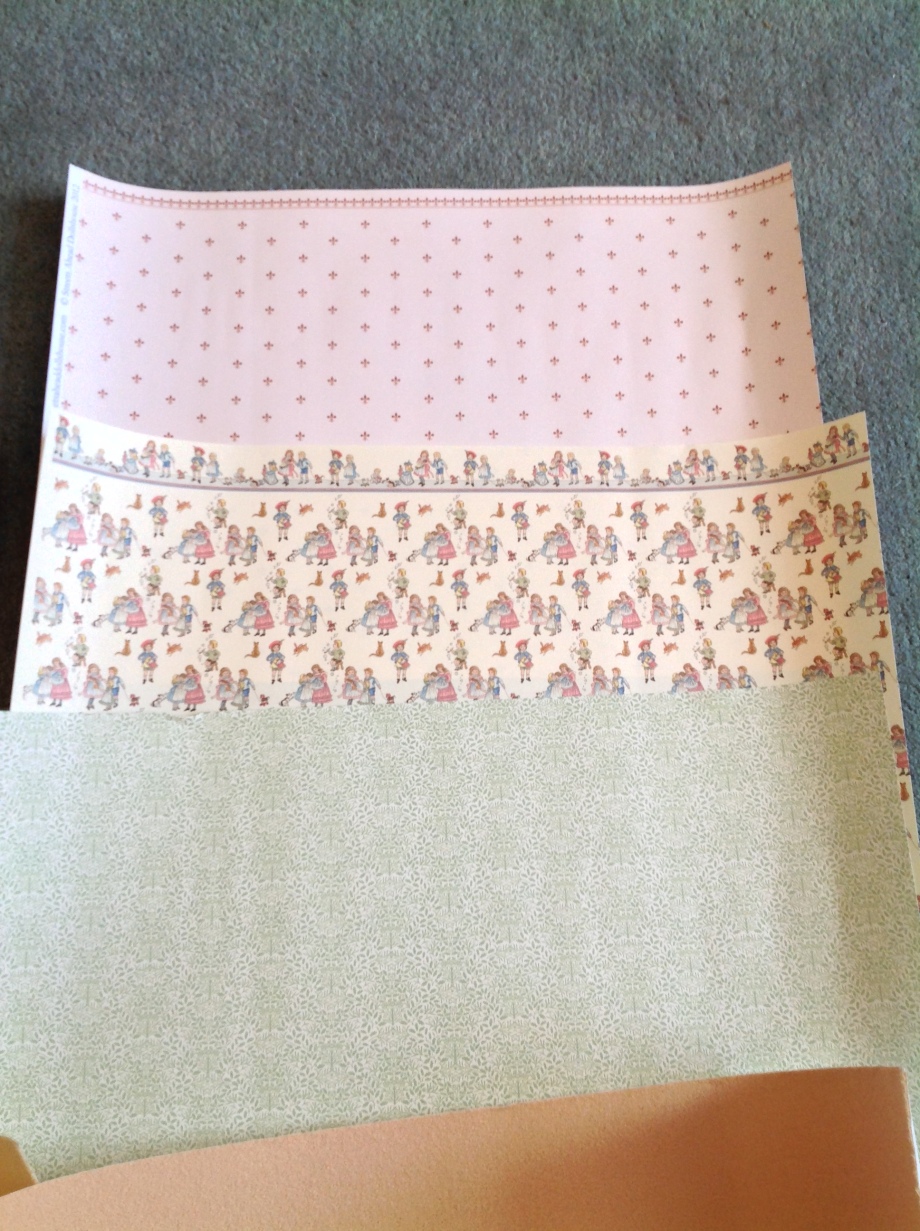 And so, here’s how I’ve set about decorating my Cedar Terrace town house.  This kind of thing is called a Tutorial, although I hesitate to call it that since I’m pretty sure most people can work out how to do stuff for themselves, but my clever, talented and good looking niece No.3 suggested I include tutorials in any further Sylvanian-based posts, being that blog readers like that sort of thing, whilst also suggesting I re-name my blog Sylvanian Famdom (get it? I nearly didn’t, but it’s very good.)   The CMB, however, will remain as ‘all over the place’ as it’s always been, with the occasional foray into the land of Sylvania – depending on how long I (and you, my 5 constant readers) can remain interested in cute little animals that aren’t real.

My niece-inspired tutorials will be very precise (as WordPress blogs lack video capability) and I’m going to assume, as most tutorials do, that you, like Pooh Bear, have very little brain.

You will notice that I chose, in the above pics, a gentle, tasteful and refined colour scheme with regard to wallpaper, carpets, tiles and lino, feeling that my Sylvanian family should live in the kind of house I’d like to live in.   You,  of course, may have dissimilar tastes and, if you want to go with something bold, brash, loud and completely common then that’s entirely up to you.  It’s unlikely that your Sylvanian family will ever be able to criticise your interior design skills and, if they do, then I’d take it as a warning that, like me, you’ve finally lost the plot.

I began by creating templates of the inside walls of Cedar Terrace so I could cut the wallpaper to size.  I used greaseproof and baking paper; a pair of scissors (to cut things); a pencil (for marking the paper) and a ruler (for making straight lines.)

Here’s a picture of a pair of scissors, a pencil and a ruler (in fact the very ones I used) in case you’re not up to speed in the scissor/pencil/ruler department.

The baking paper was brilliant, being as it’s see through and quite tough.  It didn’t tear when I outlined areas in pencil, or when I cut into it.  The see through bit was particularly helpful as I could see the windows clearly to draw around them.  The first floor proved impossible in terms of adult hands manoeuvring pencil and paper around in such a tiny space, as the second floor is non-removable (unlike the 3rd floor) so a tip would be to trace your template on the outside of the house for this floor:

The rest of the house can be done on the inside:

Now this tracing and cutting out of the wall panels is a time consuming and laborious process; at some point you’re probably going to pause awhile and reflect on the meaning of life (your life in particular), wondering just exactly why you’re doing this and facing up to the scary prospect that you may have lost all your marbles.  Keep your chin up, this phase will pass as your templates collect in a pile beside you (they must be positioned beside you and in a pile.)   Remember to write which bit of the house each template is for, using your pencil, like this: 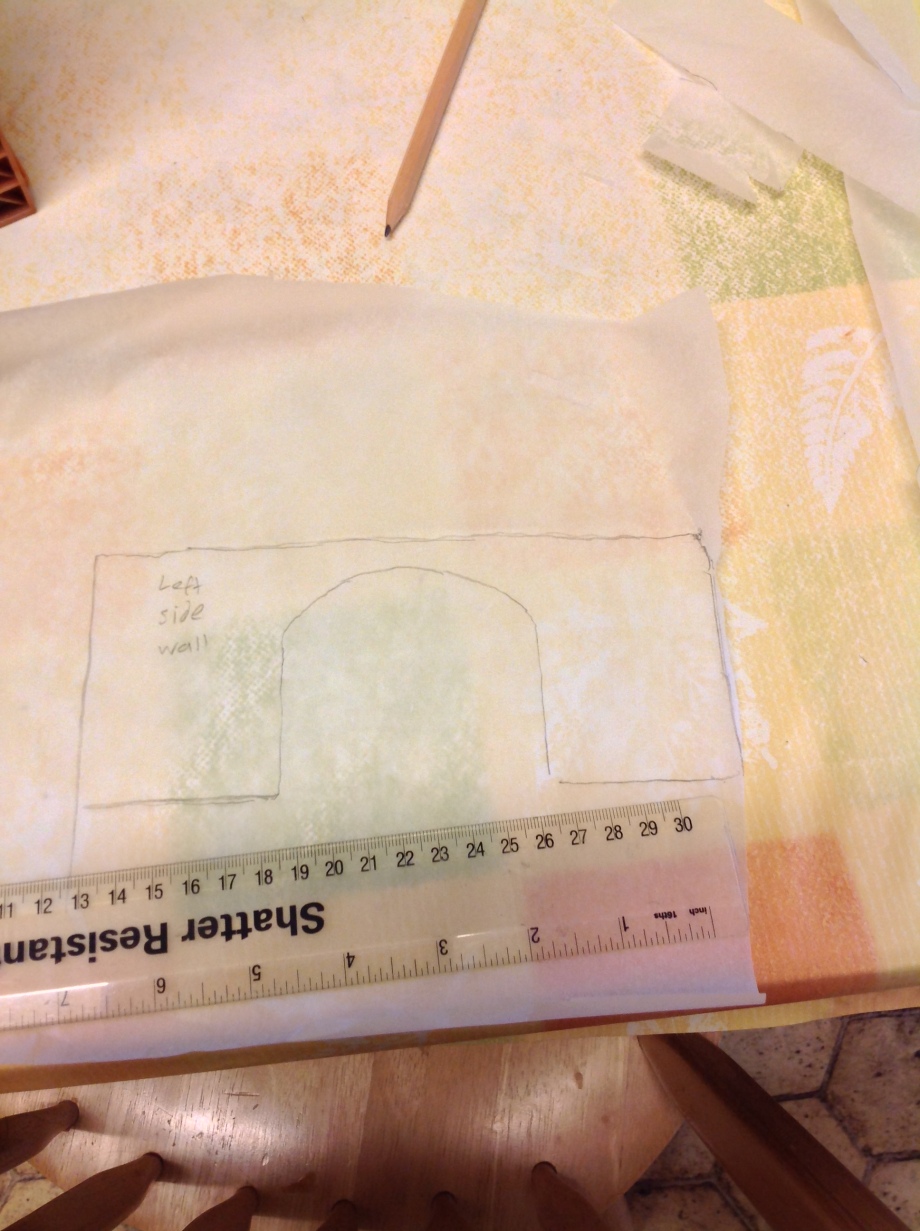 I did find, however, that templates made from baking sheets tend to curl at the edges, so it remains to be seen how effective they’ll be when it comes to cutting out the wallpaper:

Then place the templates, for each floor, in separate food bags. I used food bags because they were in the same drawer as the greaseproof and baking paper and I thought, ‘oh here’s some handy little bags’.  You, on the other hand, may use something entirely different, particularly if you use normal, non-see through paper to create your templates.  For instance, you might use printing paper and find some empty ink cartridge boxes nearby, or there might be a large empty packet of M&Ms on your desk, that you secretly demolished the night before, even though your partner thinks you’re sticking to that diet, in which case you can bung your templates in there.  Label your container of choice with the respective floor numbers so they don’t become mixed up – like this:

5 thoughts on “Improving Utopia – Part One”