(Don’t read if you’ve not been on the tour, but then reading is never the same thing as seeing, so read on if you don’t mind spoilers.)

We went to Leavesden Studio yesterday for the Harry Potter tour.  I’d been meaning to go for ages but never got around to it.  Something to do with dreading the drive – it taking in the M25 as it does.  Not that I had to drive there; my driving forays take place within a strict 5 mile radius, to places that I know how to get to.  Should I encounter unexpected detours on these routes, then the heart rate goes up, my pupils dilate (probably, if I could see them) and I start talking to myself – something along the lines of:  ‘Oh sh*t, what am I going to do now?’  saying it over and over again as though this will guarantee a miraculous answer.

So, the husband graciously does all the lengthy, stress filled driving to unknown places. However,  this does nothing to calm my car-based anxiety, for the husband might be in the actual driving seat, but I’m in the back-seat driving seat, living vicariously.   I sit by his side in a state of absolute rigid panic; clinging to the door handle, monitoring the wing mirrors, monitoring his speed, monitoring other drivers.  Thankfully the road to Watford was pretty clear and involved only three drivers intent on manslaughter.  The journey took 2 hours.  According to the AA route planner it should take 1hr 28 minutes from our neck of the woods, but the AA people didn’t take into account the fact that the husband stopped off at a tip, for a bit of a rummage and then there was a slight holdup on the M25.

I had checked the AA planner and written down instructions for Leavesden studios, in case the SatNav played up.  I informed the husband that we had to come off at Junction 19 (M25) and we’d be at the studios in a flash.  ‘No, it’s junction 20, I googled it,’ he replied with absolute certainty.  Fearing the worst, I whinged in top class fashion that it was 19 and I didn’t want us to get lost.  ‘Look, I’m driving,’ the husband barked, and then 10 minutes later casually mentioned that it was 19, as though he’d been right all along.

Our tickets came with a time slot, which is brilliant for crowd control, as I assume they allocate just enough spaces for each slot, to make going round the tour a pleasure and not an ordeal.  The tour was still in Christmas mode on our arrival and we were greeted by a gigantic Christmas tree in the main entrance, covered in fake snow.

Moving rapidly (the husband is not much of an HP fan and I got the feeling he wanted this thing over and done with) we joined a winding queue and then passed through double doors, into a sort of darkened holding area surrounded by oblong screens on all sides.  The double doors closed and I immediately felt trapped, being that our guide blathered on about how the tour had now begun and there was no going back.  I also felt in desperate need of the loo, in the knowledge that a woman outside had told us that it was roughly 2 hours to the next loo stop.  The oblong screens suddenly sprang into life and various Potter luminaries began giving us a very potted Potter history of how the movies came into being, and then another set of doors opened and, like magic (very appropriately), we were suddenly in a cinema.

Sitting down in front of a gigantic screen, a guide appeared and asked if there were any Harry Potter fans in the audience.  Being British, this attempt at jollity was met by absolute silence, except that me and a bloke cried ‘Yes!’ in a very weak and ineffectual manner.  ‘Ok, just a couple of you then,’ the guide said, before remonstrating with his audience that we all could do much better.  After a resounding ‘YES!’ from the audience we were allowed to watch clips from all the films (the cinema guide joked that we’d be watching all 8 films back to back) before Harry, Ron and Hermione appeared to tell us that, as actors, they were just the frontmen and we were about to see the work carried out by all the unsung heroes involved in the Potter movies.  Finally Daniel Radcliffe disappeared behind the doors of the great hall, motioning us to follow, and suddenly the giant screen rose and we were facing the real entrance to the actual great hall. 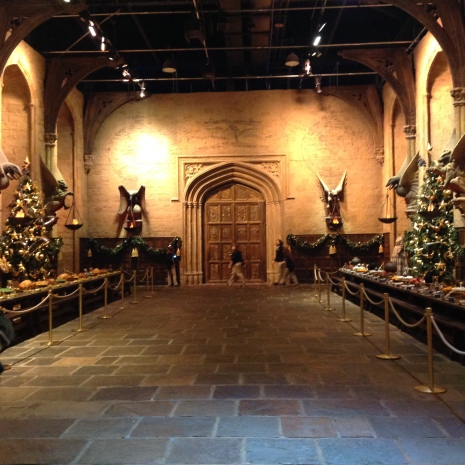 This moment was incredibly effective and a real surprise.  Another guide appeared and told us to gather round the doors, whilst we all gawped and gazed at the bit of Hogwarts that had magically appeared before our eyes.  The guide gave a short talk before guiding us through the doors.  And there we were, standing in the middle of a fake stone floor, the long dining tables at each side and Christmas trees lining the walls.  Looking up the ceiling was a dark cavern, full of scaffolding holding studio lights.  And you began to understand the work that goes into creating something that looks so real on screen, but is actually a ‘dead’ set, stored in a giant metallic shed somewhere just outside London.

The great hall guide gibbered on nineteen to the dozen (you got the feeling her job had become just this side of monotonous) as she rapidly talked us through everything on show before announcing that this was where the guided part of the tour ended and we were free to do our own thing at our own pace.  The husband could barely hide his joy.  ‘Come on, we can probably get round the whole lot in an hour,’ he cried, whilst practically running out of the beautiful great hall.  ‘I’m doing this properly,’ I warned, as I ran behind him, ‘the guide said it takes roughly 3 hours!’

The hall led into an enormous room containing anything and everything from the films.  There were props (beautifully handmade), oil paintings (hand painted, some of which were likenesses of people involved in the films, which you’d never notice from watching the films – I spotted David Heyman in one.)   There was the Weasley’s kitchen, complete with magically moving utensils (you waved your hand over a screen to get them to work.)  There was Hagrid’s house; one of the great staircases; wand waving lessons; a chance to be filmed on a broomstick, with model quidditch players flying overhead.

Too much to take in really in one visit.  And then I found the loo (hurray.)  And then a short walk down a corridor (filled with original artwork from the films) took us to platform 9 ¾  where the Hogwarts Express was standing.  Here you can ‘push’ trolleys that are midway through the walls;  buy gifts from the railway themed shop and be filmed on a carriage mock-up.  But most people queued to get on the Hogwarts Express (which periodically whistled and blew off steam) to walk down the very narrow cramped aisle, where you can peer into the carriages, each one dressed as Ron, Hermione’s and Harry’s carriage as it appeared in each film.  By this time the husband was getting more and more into HP mode, reflecting upon how he used to travel in carriages just like this one in his long ago youth.  Son no.3 mentioned he was thinking of getting himself a house hoody from the shop. ‘Gryffindor?’  I asked, ‘No, Ravenclaw.’   ‘I’ll be Hubble Bubble,’ the husband immediately said.  I swear this is true (I still haven’t stopped laughing) whilst also asking me if that was ‘hairy minnie’ when we paused to look at a headless model wearing Hermione’s clothes.  To be fair the husband has an idiosyncratic way with words which borders on the genius.

Wending our way out of platform 9 ¾ we turned a corner to be met by a model of Hogwarts.  To call it a model is a bit of an understatement.  It was sort of breathtaking and all lit up by a mysteriously blue glow; it was also covered in a layer of fake snow.  We strolled round the model and then sat down on a bench whilst a group of young people (and not so young) wandered past us dressed as various characters from the books. 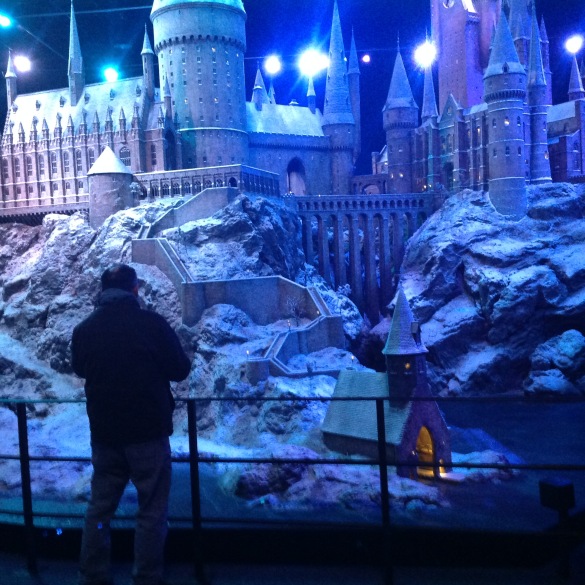 Now, I loved the HP books; I devoured them at breakneck speed.  I also loved The Hobbit and The Lord of the Rings.  In fact anything fantastical or ghostly, as a teenager, was just my cup of tea, so maybe I qualify as a sort of Nerdy type but it would never occur to me to dress up as a literary character.  So I’ve had to look up the definition of the word Nerd, because the people who turned up in their cloaks and wands were on a whole other level of Nerdship.

Nerd:  a foolish or contemptible person who lacks social skills or, a single minded expert in a technical field (which is kinder don’t you think.)  Clearly the word Nerd is bandied about too much these days.  I’m thinking a more proper term would be ‘unhinged fan’ (I jest.)

Early on in the tour I mistakenly though these individuals were tour guides because, quite frankly, who else would cover themselves in white face paint and pretend to be Lord Voldemort?  I asked one of them (a young lady dressed in a cloak and a waistcoat and a blue cravat – not sure who she was meant to be) where Daniel Radcliffe’s name was in the wand room.  The wand room was chock-a-block with wand boxes, each with a name.   The young lady showed me his name and went into extraordinarily lengthy detail about the other names, before her friend came over and said she wanted to see the next room and they disappeared.  I then realised that she was on the tour and, after following her around, it was clear that this was her umpteenth visit and the glee and unadulterated Nerdiness/fandom that shone forth from her Nerdy face was astonishing.  It was like one of those painting of the shepherds gazing at the baby Jesus; the ones where they’re all lit up with a heavenly glow.

So, one thing my visit to the HP studios taught me is that I’m definitely not a Nerd (aka enthusiastic fan.)  The other thing I learned is that I will never take to Butterbeer, well at least not the stuff they serve up in the studios Backlot Café.  To say it’s DIRE doesn’t do justice to just how peculiarly DIRE it is.  We forked out £6.35 each, to keep the plastic replica movie mug it came in, and we had to throw these away because we couldn’t drink the stuff.  And we didn’t even mind throwing away roughly three quid because the thought of actually drinking the stuff made us collectively heave.  The husband (who will eat and drink anything) finally managed to heroically down his butterbeer, but had to do it rather like you’d take medicine – all in one go and with a lot of scary gagging.

After gorging ourselves on an equally revolting hot dog, we exited the backlot for a quick tour of the Knight Bus, Privet Drive and that arched bridge – all in the dark, as our time slot had begun at 4 – and finished up in the enormous gift shop, where son no.3 also bought a chocolate frog in the movie type packaging.

Upon opening it at home he discovered a surprisingly large frog made of dense, heavy duty chocolate, so heavy you could use it as a door stop – he’s still trying to eat his way through it without breaking his teeth.