Cedar Terrace has been standing unattended on the coffee table in the lounge for a few weeks now.  I sort of fixed the kitchen lino, which had presented a health hazard (see comments section on this post) by dispensing with the useless Pritt stick and switching to PVA glue, which is miraculous stuff.  It stuck things down so well that you’d think it’d be stuffed full of death defying chemicals, but it’s so user friendly you can practically eat the stuff; which I accidentally did, so can attest to the fact that a glue-related incident did not occur.  I got a bottle of very cheap PVA glue (£1) which, due to its dirt cheapness, had the consistency of coloured (white) water.  Every time I applied it to an object, excess glue would seep about all over the place, which I rubbed away with a tissue and my fingers.  Engrossed in holding said objects in place so they would stick, I forgot about the glue stained fingers, went off to eat lunch and ended up ingesting glue along with the egg sandwich.

Since writing that paragraph, editing mode has alerted me to the fact that PVA glue, when ingested, is toxic so you can’t in fact eat it (or drink it in my watery glue case.)  Switching to panic mode I researched further, to find a message board in the forgotten corners of the internet, featuring a conversation with a young bloke/student determined to swig down a shot glass of PVA glue for a bet, being that it’s non-toxic.  The ensuing conversations were a lesson in misplaced concern, gullibility and internet madness, ending when somebody else reported snorting up the contents of a teabag for a laugh.  So numbed am I towards all things internet, that I barely flinched in the face of this hilarious insanity.

The first job in the continuing doing up of the house was to make curtains for all the little windows.  I decided to go with blind type things instead, after checking out how other Sylvanianites dress their windows.  Curtains would nearly cover the windows (thus hiding window cuteness) and would require a pelmet to finish them off, which seemed like way too much bother, being that my interest in Sylvania is rapidly waning.

Luckily we have a shop around the corner which sells carpets but is also a haberdashery (weird word with no known origin) selling needles, threads, ribbons, lace, buttons and bows.   I paused here as a song from the dim and distant past, concerning buttons and bows, began floating down the neural pathways.  Google directed me to YouTube where Bob Hope sat in the back of a prairie wagon belting out Buttons and Bows:

I came back from the haberdashery with this stash. 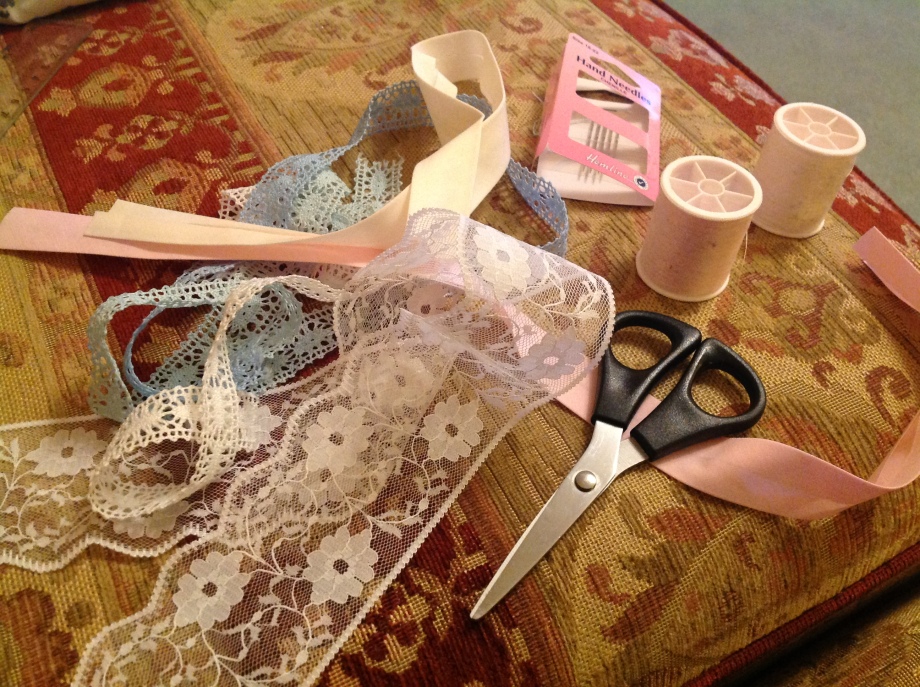 I cut the ribbons to the length of each window, stitched on some lace and added buttons and bows.

I wanted pictures to hang on a wall so cut a couple of tiny Van Gogh prints from a dolls house catalogue, stuck them on thick card and cut matchsticks to make a frame, sticking them to the card then used felt tip as ‘varnish.’

There happens to be a model shop around the corner too, which I’ve barely set foot in during the last 30 years, being that it specialises in model railways and airfix kits.  I decided to give it a go, to find that it now sells dolls houses/furniture too; along with tiny wallpaper and carpets – the ones I ordered online, paying postage, when I could have just skipped up the road.

The proprietor was standing behind a raised counter at the back of the shop. The shop is small and packed to the rafters with miniature stuff lining two aisles big enough for just one person to walk through, leading to immediate traffic jams should anyone else enter the shop.  A woman was chatting at the counter (whilst I checked out tiny furniture) asking the bloke there how he was etc, to which he replied,’Have you heard the latest?’  She must be a regular thought I, whilst picking up an object so small I couldn’t work out what it was, being I never take my reading glasses along on shopping trips (it was a tiny iron.)  ‘Oh dear, still not better?’ the woman replied which opened the floodgates.

‘The GP’s have given up on me and I’ve given up on them.’ the bloke continued.  ‘I’ve had five lots of antibiotics the past year and they’ve done nothing and now they’re saying they can’t give me anymore and there’s nothing more they can do.  I’ve got Lyme disease.  The hospital don’t know what to do with me either.  I’ve been looking into herbal remedies online and I’m going to start treating myself.  I’m tired all the time (interrupted by copious coughing and nose blowing) but just have to carry on, nothing else I can do is there?’

Lyme disease?   My brain immediately started processing all its medical data acquired from years of consultations with Dr Google and came up with Ticks.  Lyme disease was something to do with getting bitten by ticks, or ticks burrowing into your skin and staying there, and it was the sort of thing that could turn nasty but, more importantly, was it infectious?   This bloke was spreading germs all over the place via coughs and sneezes and also appeared intent on giving his customers the detailed lowdown on his sorry plight;  trapping them into further contact with the contaminated air around his counter space.  So I paid for my toy train for the toy bears (£1.25) a tiffany lamp (£5.80) and a swiss cuckoo clock (just because) by placing them on the counter, then standing about an arm’s length away whilst he placed them in a bag, then put my tenner down on the counter eliminating hand contact, forgetting that he had to put change in my hand.  Exiting the shop I vowed to look up Lyme disease, which I forgot to do until now.

Lyme disease or Lyme borreliosis is a bacterial infection spread to humans by infected ticks. Ticks attach themselves to the skin for 24 hours, bite into it and feed on your blood.  If not treated early it can lead to lasting and severe symptoms.  Lyme disease is not infectious.

The Sylvanian washing machine came with a shelf stand so I stuck that onto the kitchen wall and used it as a cup/plate holder. And this is Cedar Terrace now: 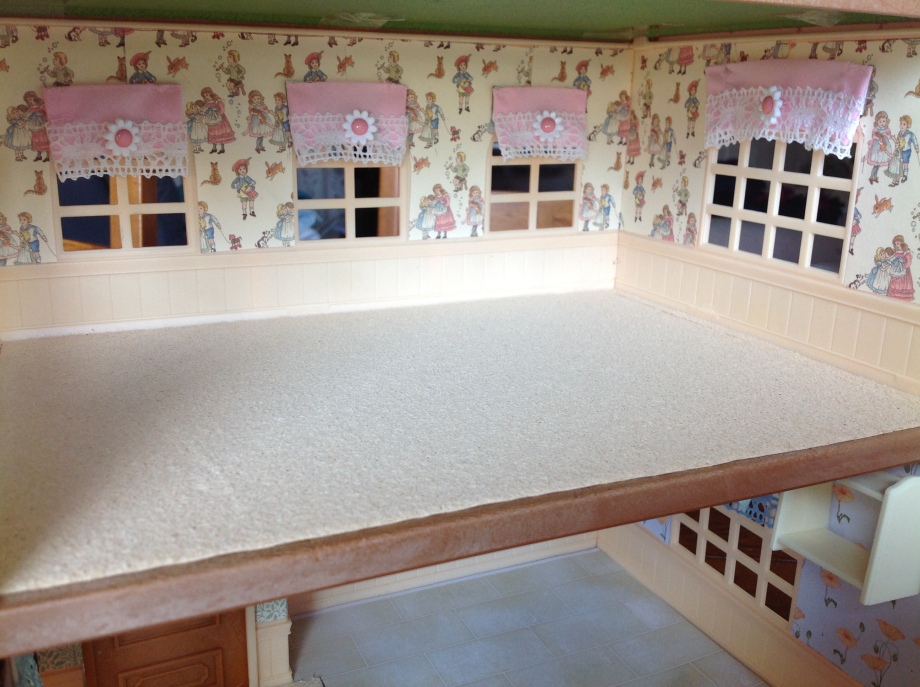 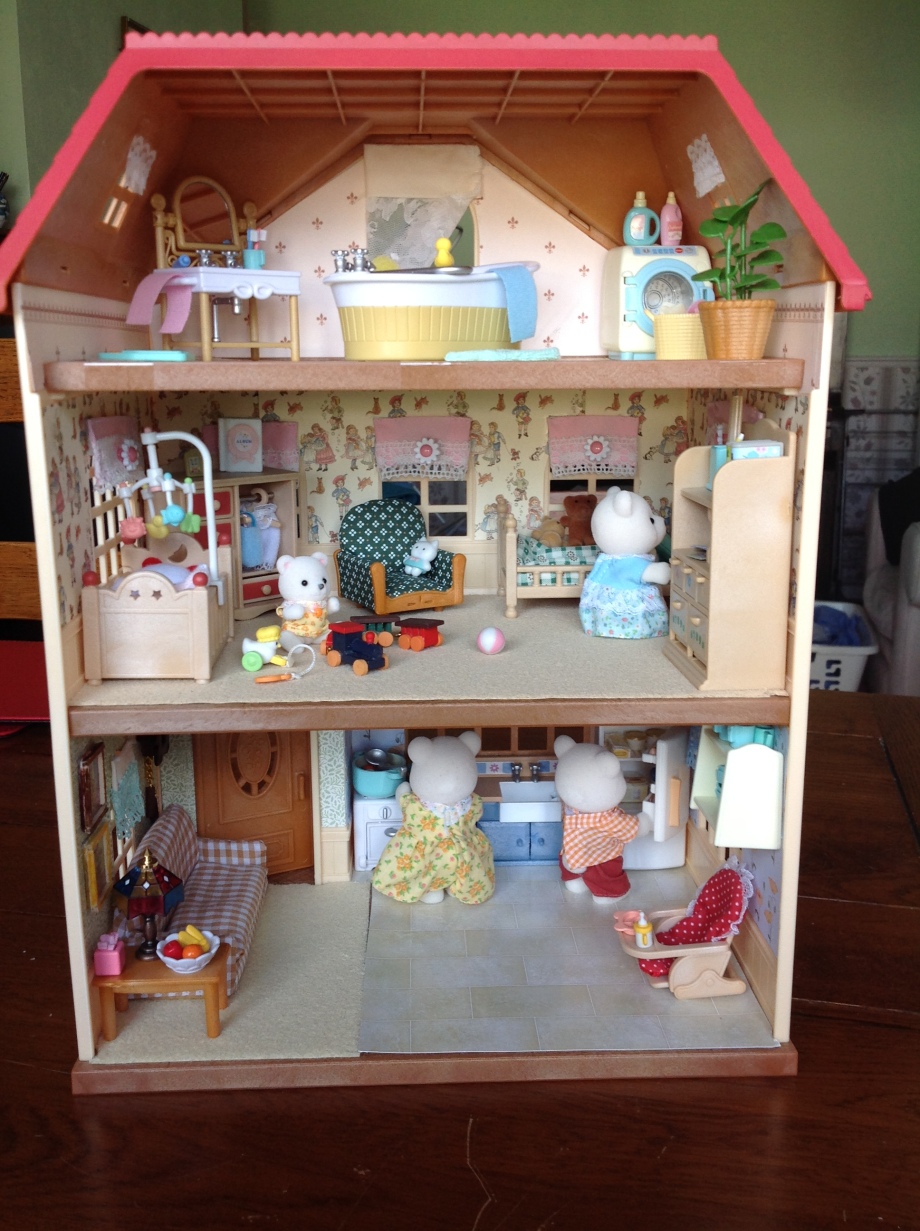 Papa Bear, like the husband, is forlornly checking out the fridge hoping to find something worth eating in there, somewhere.