Dear Blog that no one reads, (except for my mum, dad, sister, brother-in-law, a couple of nieces and two sons, for which I’m very grateful.)

You have become my online friend – does this mean I’m a middle-aged saddo?  (no answers on a postcard please.)

Today, I imagine you’re a little deserted island, located somewhere tropical and surrounded by a startlingly clear, sapphire-blue sea.  In the middle of this island there sits a charming tree house, constructed by myself, which looks a lot like it came from the Sylvanian Families’ collection. 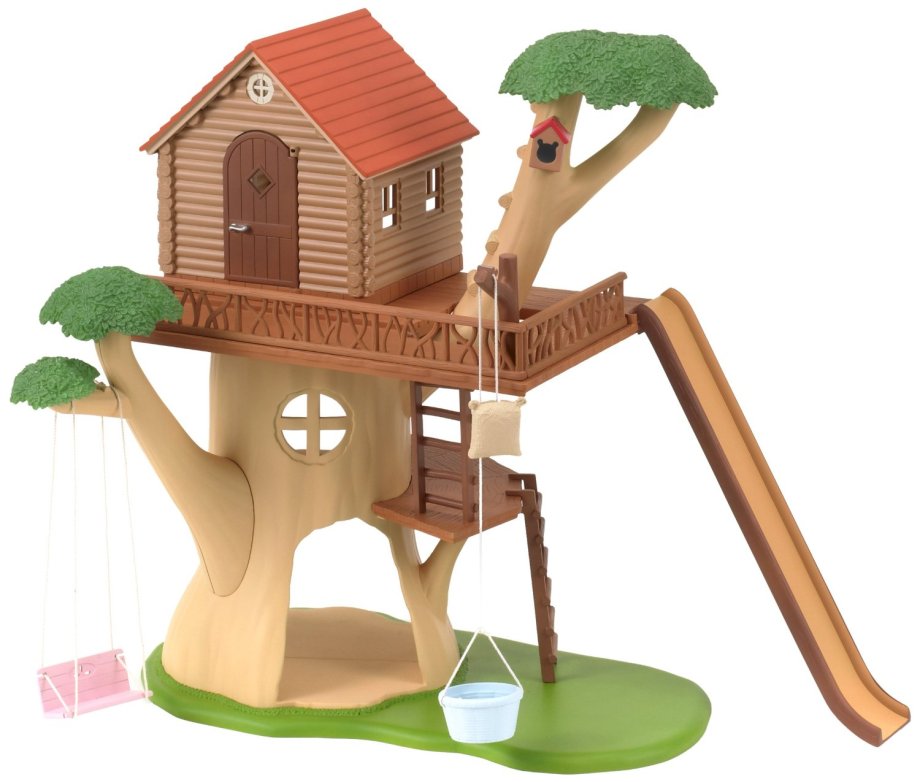 To digress.  I used to want to own a Sylvanian Family’s house, along with its animal inmates; either the bear clan or the rabbits.  Consequently I tried to get my three sons interested in the concept of domesticity and dressing up strange little animals and such like, so that I could spend a lot of money amassing a Sylvanian collection for myself – under the pretence that I was doing it for the kids.  This ruse failed miserably and I remain Sylvanian-less.

Back on the island and I’m to be found sitting at an antique desk, ink pen in hand, scrawling little blog posts; rolling up the bits of paper, placing them in bottles and throwing them into the clear blue sea, with the hope that a passing ship might notice; but mostly they sink without trace.  Here I am: 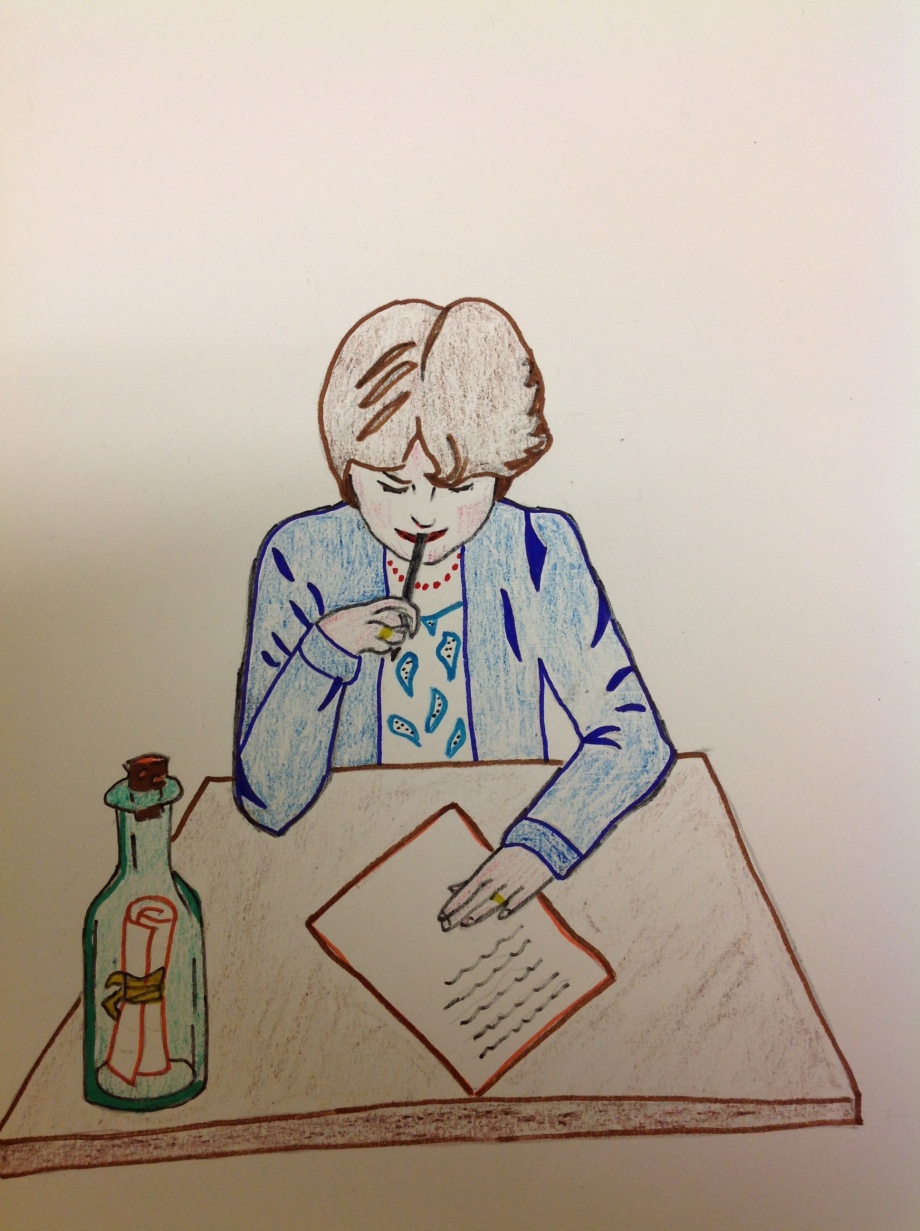 However, the sound of waves lapping up against the shore and the tropical bird song is soothing, meaning this writerly, anonymous isolation is really quite nice.

Over the weekend blog, I was doing some internet research on all things blog-like, because I’ve become a little obsessive re: the art of blogging and I made a startling discovery.  You, dearest Blog, are what is referred to as ‘self-hosted’.   I double checked this with son No. 2, pestering him via mobile phone when he was out and about, and most definitely not wanting to be disturbed by his lunatic blog-obsessed mother.

You are a WordPress blog, and being self-hosted means you were downloaded from WordPress.org and not WordPress.com.   I didn’t know this.  Being self-hosted means I (and when I say ‘I’, I mean my long suffering husband) pay an independent hosting company (bluehost, who are meant to be very good) for their services but the responsibility of blog maintenance and upkeep is all mine, rather like owning an online pet, which means carrying out backups, security upgrades etc by my little lonesome self (and help from son No. 2 to be honest.)

The .org way also means I have complete control of the goings-on of my site, with an ability to customise it and use a million plugins if I so desire (just look how the techie language trips off my tongue) – said flexibility being unavailable on WordPress.com.

Wondering what the further differences were between going with WordPress.org or WordPress.com led me to spend further weekend hours surfing the net indoors, reading heated debate within the internet ether on whether your prized blog should be .com or .org.   Time which could have been better spent sitting outside in the real world, where it happened to be all nice and sunny.

But the most striking revelation for this non-internet savvy dolt was that if your blog is self-hosted then it’s virtually INVISIBLE.  I mean blog, you are so invisible you may as well be wearing Harry Potter’s invisibility cloak.   That barren stats landscape of mine is partly because I’m not part of the blogging community via WordPress.com.  In other words I’m flying well below Automattic’s (the owners of WordPress) radar.

If I signed up to WordPress.com I would accrue many benefits.  They do all the hosting and routine maintenance of your site; but the truly MASSIVE plus to being hosted by WordPress.com is something called Freshly Pressed, a something I only just found out about.  Every day a team of blog spotters at WordPress.com go trawling through the net to find blog posts they find wonderful/slightly contentious/inspiring, and then publish them on the WordPress front page, guaranteeing a massive rise in hits to your previously invisible blog.  This stupendous rise in hits, and the millions of ensuing comments, causes the average blogger to jump up and down with joy and heady excitement, but their 15 minutes of fame prove to be fairly short-lived, if you bother to check out the blogs where this has happened.   Still, it probably makes all that unseen writing  feel a little more worthwhile.  There’s only one catch – you HAVE to be signed up to WordPress.com to be even considered – leaving those of us who live in independent .org land out in the cold – and the chances of being published on Freshly Pressed are supposedly very slim indeed.

Or I could turn myself into a Gravatar (help I’m not this techie!) and publish an attractive (might be difficult) photo of myself that would show up alongside any comments I made on someone else’s blog, and this Gravatar would follow me around all over the web (like I’m stalking myself) wherever I made a comment (slightly scary; for the commentee that is.)

So dear blog, I have been thinking of moving you over to WordPress.com. This of course means I would have to become a ‘community’ type of person which, being incredibly anti-social, I find strangely difficult.  I only just joined the Facebook community a year ago and that’s been going for 10 years, and the blogging community even longer.

But luckily the blogging community appears to be a very nice and lovely one, and the community would appear to be the whole point of blogging in the first place, falling more in line with social media.  And it’s nice to receive comments on your bloggerly efforts, even if your only feedback  currently arrives via your dad and your sister.

After much, mostly pointless deliberation, I’ve decided to keep things just as they are, because there’s a possibility I may lose your lovely blog theme/template by going .com (WordPress.com restrict you to the use of their templates.)  And blog, there’s also a very remote possibility that WordPress.com would simply delete you from the blogosphere if I post anything which contradicts their mostly mysterious bloggy rules – this has actually happened to some people and they don’t know why and appear to be still fuming about it.

But I am going to get myself a Gravatar on my anonymous profile thingy – I just have to make sure that the lighting is right and that I’m wearing something other than the middle-aged cardigan I practically live in.

*The featured image for this post is taken from wpfixit.com
*cartoon message in a bottle copied from the net