Another in my intermittent, slightly redundant series of posts, where I review movies that came out simply ages ago but I’ve only just got around to seeing them.  In homage to Interstellar’s running time (2hrs 49 mins), you’ll find that this post also goes on a bit.

I’ve seen just enough of the Dark Knight trilogy to know that Christian Bale’s Batman is in desperate need of a fisherman’s friend or maybe a couple of strepsils,  and that Michael Caine appears to be EVERYONE’S go-to, avuncular thespian.  I’ve never watched a Nolanesque Batman all the way through – too properly violent; too much serious villainy; too little light in the unremitting darkness.

But to read about Christopher Nolan on the almost interstellar-sized Internet (which I had to do for this riveting post because I know next to nothing about him) is to read about the Second Coming or maybe the Return of the Jedi (in filmic terms.)   Nolan, it would appear, is a Movie God espousing his own fundamental filmic religion.  Nolan uses Film where others go Digital.  He rejects CGI, going with miniatures, massive wrap around screens and gigantic sets.  In an age of diminishing attention spans, he goes for challenging movie length (2-3 hours on average) risking audience boredom.  Spoken of in hushed, reverential tones, his every idiosyncratic movement is explored in terms of the ‘Auteur’, as a throw-back to Kubrick, film noir and Hitchcock.

A Nolan film is an event (apparently) anticipated as much by those in the movie business as the movie goer.

So I sat down to watch Interstellar on Sky this week, primed with images from Nolan’s previous work (rapidly researched via YouTube) and the memory that son No.2 had seen the film at the cinema a year earlier, falling asleep midway through.

The primed Nolan images were mostly dark and mostly confusing and most definitely not my cup of tea – writing as a middle-aged woman whose hobbies include knitting – not firearms or fisticuffs resulting in a concussion.

The first surprise was that Interstellar is non-violent, if you discount a slightly hilarious and incongruous fight between two astronauts on a distant ice-bound planet, where space suits prevent a punch being taken or a drop of blood being shed.  It’s not dark, unless you discount the premise that the world is starving to death, because of a lethal crop blight, turning the planet into an almighty dust bowl where the inhabitants are also slowly suffocating to death.

Describing what Interstellar is – that’s difficult.  Documentary style opening/ghost story/modern Western/Science Fiction/Science Fact/Love Story/Disaster Movie?  It’s almost every genre of movie rolled into one, but the overriding emotion is LOVE and the overriding message seems to be that LOVE conquers all – even Time and Space.

Matthew McConaughey is Cooper, a widower and former NASA pilot living in a near future on a farm with his Dad (John Lithgow, the other go-to actor if you want an aged-relative, who I remember more clearly as a manic comic genius) his son Tom and Murph, his clever-clogs daughter.  Laptops are still in use, the cars look the same, clothes look the same but the earth is dying.

At this point I lost approximately 5 hours during the writing of this post sort of proving Einstein’s theory of relativity, one of the cornerstones of this movie (rather like Cooper loses years, whilst everyone else gets crinkly and old.)  Deciding to find out just what a dust bowl is I consulted Google, to discover that that documentary style opening to Interstellar is actual documentary footage.  Those crinkled up oldies, talking about dust in their homes and massive dust clouds and having to wear makeshift masks are real people, as opposed to fake people (aka ac-tors.)  Fascinated I turned to an American history website to find that the crop destruction, starvation and dust storms featured in Interstellar actually took place in the mid-West during the 1930s.  Nolan’s apocalyptic future is based on a scarily real, not so distant past.

Three droughts occurred in 1934, 36 and 39 across the prairies and plains of Canada and America which, combined with inappropriate farming techniques, led to the earth turning to dust, destroying 100,000,000 acres of land.  The prairie winds kicked up almighty dust storms.  On Black Sunday, April 14 1935, twenty such dust storms occurred on the same day and turned that day into night.  Three and a half million people simply abandoned their farms in a mass exodus to the towns and cities only to be met by the Great Depression.  Those who stayed suffered malnutrition, lung disease and death. 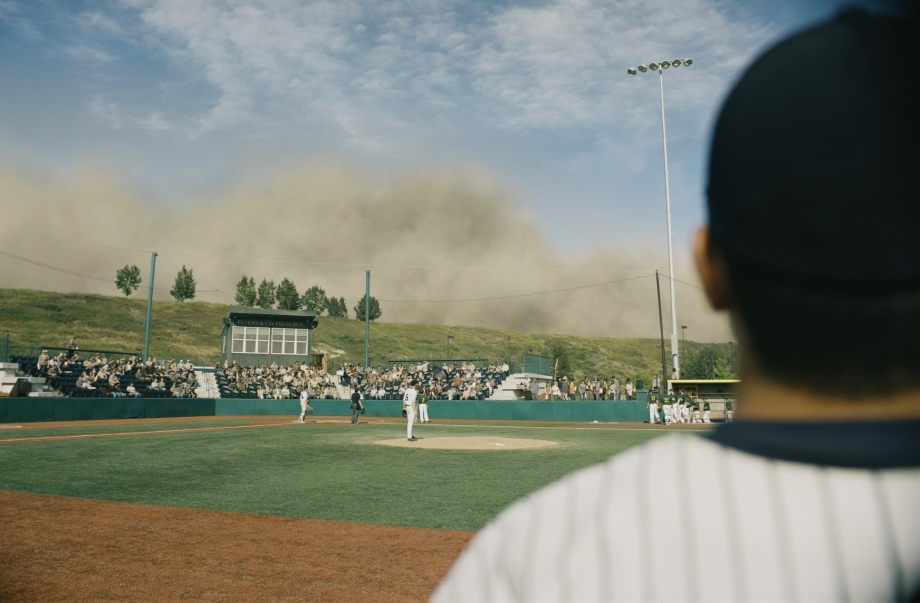 The dust storm approaching the baseball game in Interstellar

It’s not difficult to see that overpopulation, over farming and overeating will be the most likely causes of our own Interstellar-type Armageddon…..but I’m safely through my own temporary, time-shifting wormhole so, back to the movie.

Cooper and his brilliant daughter Murph (named after Murphy’s Law, but I couldn’t help hearing ‘Smurf’ every time Cooper called out his favourite kid’s name, which he did often and with varying degrees of dramatic intensity) are living in a time when science is the villain and farmers are the heroes; so much so that NASA has had to go underground, even though the beleaguered space agency is trying to save the ungrateful planet; led by Michael Caine, who is nobody’s idea of a physics genius.

A ghost inhabits the smurf’s bedroom, occasionally pushing books out from the bookshelf and playing around with dust patterns on the floor.  These patterns (actually binary code) lead Cooper to NASA’s secret location, sending him on a mission to the stars, searching for habitable planets seen through a convenient wormhole somewhere near Saturn.

‘They’ have provided the wormhole, ‘They’ led Cooper to NASA and at the end of Interstellar we sort of find out who ‘They’ are.

Interstellar begins with nearly an hour of images reminiscent of the Wizard of Oz and the wide plains of your average ‘50s Western, before we are suddenly transported to the territory of 2001 A Space Odyssey.  Hans Zimmer’s wonderful, driving score – making brilliant use of the much underused church organ (in filmic terms at least) – acknowledges the debt to the Odyssey by lapsing into quieter, classical mode when the spacecraft are seen floating silently in space.

Kip Thorne, an actual physicist, was the scientific advisor for the film and the emphasis on science fact, rather than fiction, can be seen in the silent journey of Cooper’s spaceship through the wormhole, switching from the noisy interior as the ship is buffeted around, to the absolute silence of space – there are no Star Trekkian, or Star Warsian, whooshing through space sound effects here.

Cooper leaves his daughter to save the world, promising that he will love her forever and most definitely come back.  The smurf doesn’t like being left at all, growing up full of anger at her absconding dad.  And that’s what this movie is all about.

Forget the science fiction and award winning special effects (the planet made entirely of water is a stunner) – this film is about family, family tensions and the unbreakable bond between a father and daughter, even if the distance between them lasts 124 years, the age Cooper winds up being when he’s saved from the gigantic, fifth dimension, time warping, book case thing from which he transmits the answer to life, the universe and everything, to the smurf via Morse Code and a watch – a serious amount of suspension of disbelief is required here.  Son No.3 currently studies physics, so not sure how all those endless, complex equations could be tapped out via a few dots and the occasional dash.

And let’s also forget that even though the Apocalypse is happening right outside their front door, Cooper or ‘Coop’  (reference to Gary Cooper maybe –  in those old style westerns where one man saves the day?)  and his neighbours seem to function pretty much as normal, going to school and eating dinner from dust laden plates; a dinner that must just be bowls full of corn, being that corn is the only thing that will grow.  Where are they getting the requisite 5 a day, not to mention those important vitamins and minerals, to have the energy to get out of bed every morning?

There are massive hints that things are less than hunky-dory though.  The education system doesn’t believe in science anymore, spreading the word that the moon landings were fake and that science has nothing to offer humanity. A sentiment Nolan seems to agree with given that Lurve turns out to be quantifiable and saves the entire universe.

There is no army, no government (I assume) but baseball is still going strong which is where we’re treated to our first sighting of a gigantic dust cloud.  Apparently all you need to do when faced with a cloud of dust as high as a mountain is don a flimsy face mask (the kind I use for a spot of DIY) and run like hell.

Yes, Interstellar is a tale made up of many unanswerable and very odd questions.

Why does Matt Damon (Dr Mann) try to kill Cooper?

Again, why does Matt Damon hug the life out of ‘Coop’ and then push him down the side of an alien mountain and start blathering on about how the last thing you see on the point of death is your kids?

When the entire planet is starving where does all the money come from to fund education, baseball matches and that massive space station in the NASA underground bunker?

Why is everybody so strangely calm, sipping beer on the porch (where does the beer come from in a world of corn) instead of running about like headless chickens?

Is it possible to live on corn alone?

Are the computer/robots’ names significant?  You can make three anagrams from TARS the robot’s name – ARTS, STAR and RATS.  My lunatic theory is that Nolan rather cleverly distilled the film’s entire plotline into the name of computer one (TARS) as this is an ‘arts’y tale about the ‘stars’ wherein mankind attempts to leave the planet like ‘rats’ deserting a sinking ship.

Does Cooper really enter a black hole or did he fall asleep like Alice and fall down the rabbit hole of reality?

All these imponderables led to some fine movie images – dust settling on a book shelf, dust falling through beams of sunlight, dust covering a laptop (who knew dust was so cinematic?)   Endless sweeping vistas of row upon row of corn.  Lonely farmhouses.  The rings of Saturn. A wormhole looking like somebody had blown an almighty bubble. The earth spinning in blue and white glory. Mile high waves.  Frozen planets.

I wish I’d seen it at the cinema, where the big screen would have done justice to this strange mish-mash of scientific theory and the seemingly supernatural power of LOVE.

One last thing.  ‘They’ are apparently a future us and Cooper is the ghost.

How did you do?  Did you make it this far, or did your mind wander half way through, like quite a few movie goers’ first viewing experience of Interstellar.